I've been spending the last couple weeks moving into my new place on 33rd and 8th.  I'm caddy corner from Madison Square Garden.  Again, not the best neighborhood and it's basically tourist central, but it's the best apartment i've ever been in as far as amenities, and the view from my room and the roof is amazing! 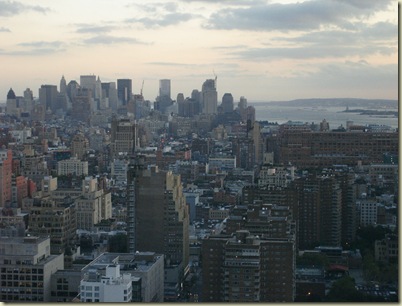 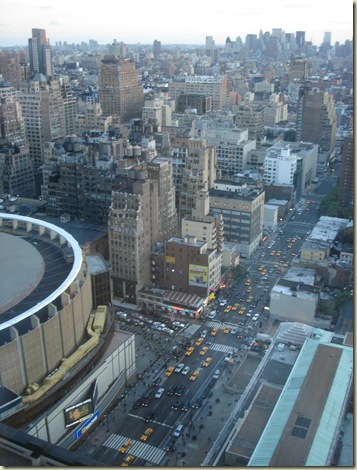 Madison Square Garden on the bottom-left


Tried a new experiment with Smile days in Central Park last week.  We've normally done these days as a way to connect with people anonymously and provide ourselves in the open spirit of offering.  This time, in addition to that, we added what we called the 'generosi-tree' (which was really more like a monster-looking thing because the artsies aren't so much happening).  In addition to offering ourselves and some food with smile cards, there were sights and sounds in the form of an acoustic guitar player and massages in sidewalk chalk.  But the centerpiece was Shephali's great idea, the generosi-tree.  It's basically a large bulletin board filled with post-it notes on 2 things:
-kindness/service ideas that anyone can do (in 4 categories: for your family/friends, for yourself, for people you don't know, for the world)
-inspiring quotes about kindness 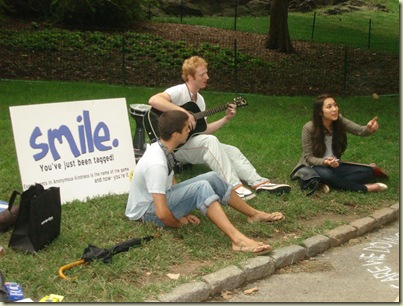 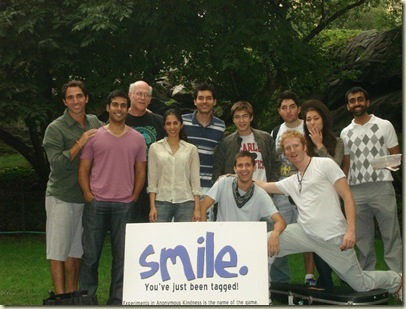 The number of people that stopped by was amazing.  Even when it started raining, people would stop and spend time reading the ENTIRE board!  Then they take one or two along with the smile card and move on.  Among the wonderful ideas taken:
-A gentleman came by and plucked "Clean up litter on your block"
-A woman who wanted to cheer up her friend chose "Write a poem for a friend"
-A four year old girl picked one that read "Hug three people for no reason"
-A teenager with broken english who was visiting from France took a quote: "Be the change that you wish to see in the world - Gandhi"

It was as though everyone left with a method to use the Smile card they just received.  Looking forward to hopefully doing this a few more times before it gets too cold.