Listening to the Dalai Lama 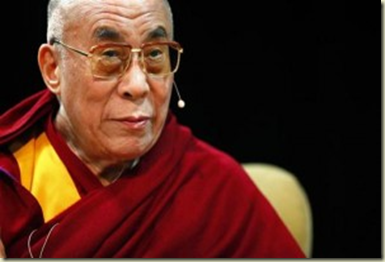 Today, Shephali and I were treated to an impromptu audience with the Dalai Lama (along with about 50 other folks) thanks to our wonderful friend Tashi.

His talk seemed totally extemporaneous and was about his gratitude to India for being such a wonderful host to his people over the past 50 years. A few of the interesting tidbits below.

He considers his mission in life two-fold: 1) espouse the values of compassionate, non-violent existence, and 2) advocate religious harmony through mutual respect. In both regards, he feels heavily influenced by values from Indian traditions (specifically, the concept of ahimsa, which he spoke on at length). In fact, he repeated referred to India as his 'guru' and and himself as a 'messenger.'

Towards the end he implored the group to actively engage in service work as a major key to help him on his mission. He ended with an interesting anecdote about the religious reciprocity between India and Tibet. Just as Buddha was from India, Lord Shiva (from the Hindu tradition) makes his home in Mount Kailash, which is located in Tibet. The two religions are quite interlinked.

The whole meeting was less than an hour long and seemed to fly by. It was awesome to hear him speak so lovingly of India.